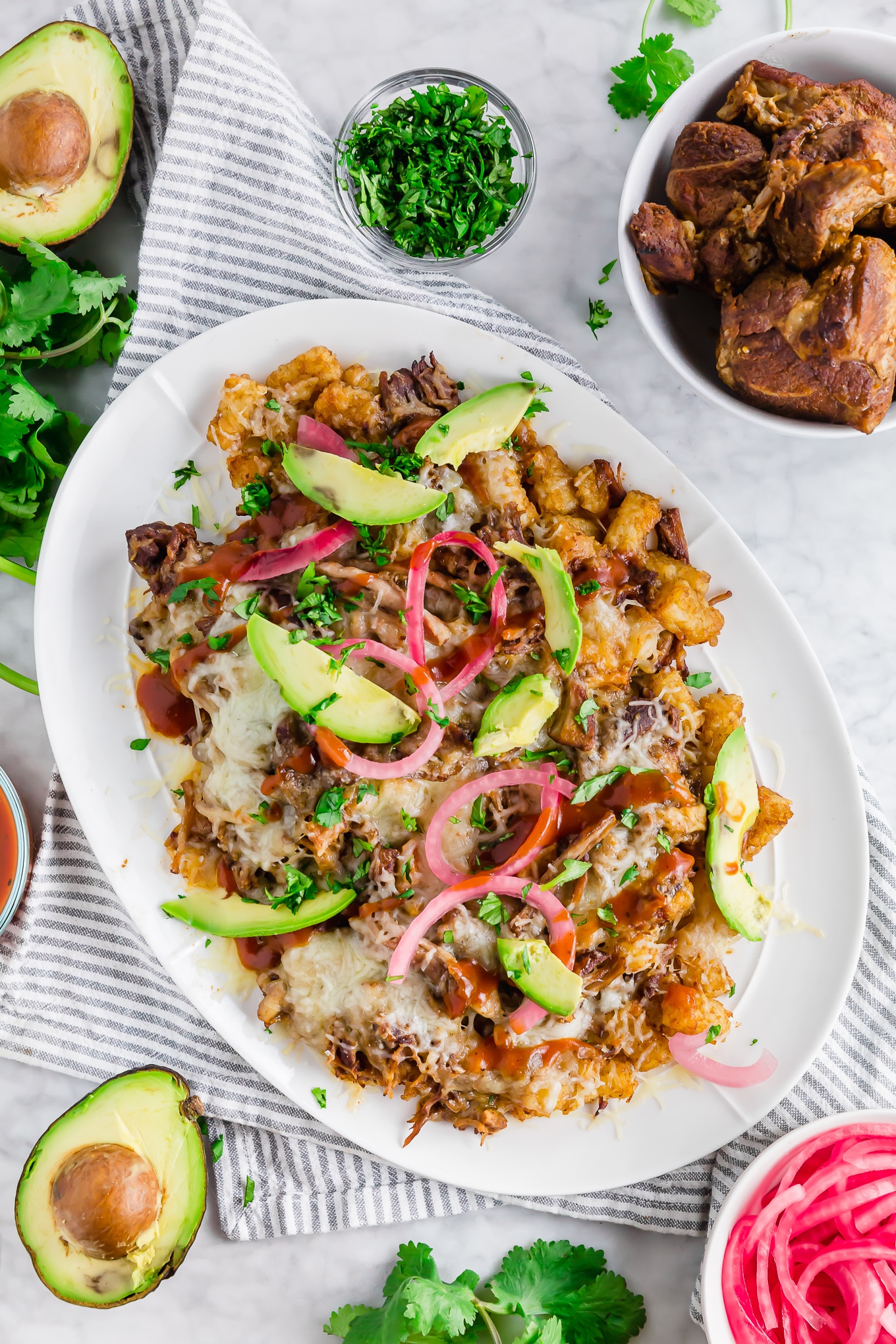 This post has been sponsored by the National Pork Board. All thoughts and opinions are my own.

These gluten-free BBQ pulled pork loaded tater tots are a delicious appetizer recipe that is perfect for watching the weekend football game with friends!

You can find all of the ingredients for this recipe at your local Jewel-Osco! Use the mobile app to find coupons and deals on your favorite products.

What are loaded tater tots?

Loaded tater tots, also sometimes called totchos, are essentially nachos that use tater tots instead of tortilla chips as the base!

They can be loaded with all the same toppings as nachos, such as shredded cheese, meat, and veggies.

While nachos make great finger food, I’ve found that totchos are best eaten with a fork. Just divvy up your loaded tater tots onto small plates and eat away! It still makes a great game-day snack for a crowd. 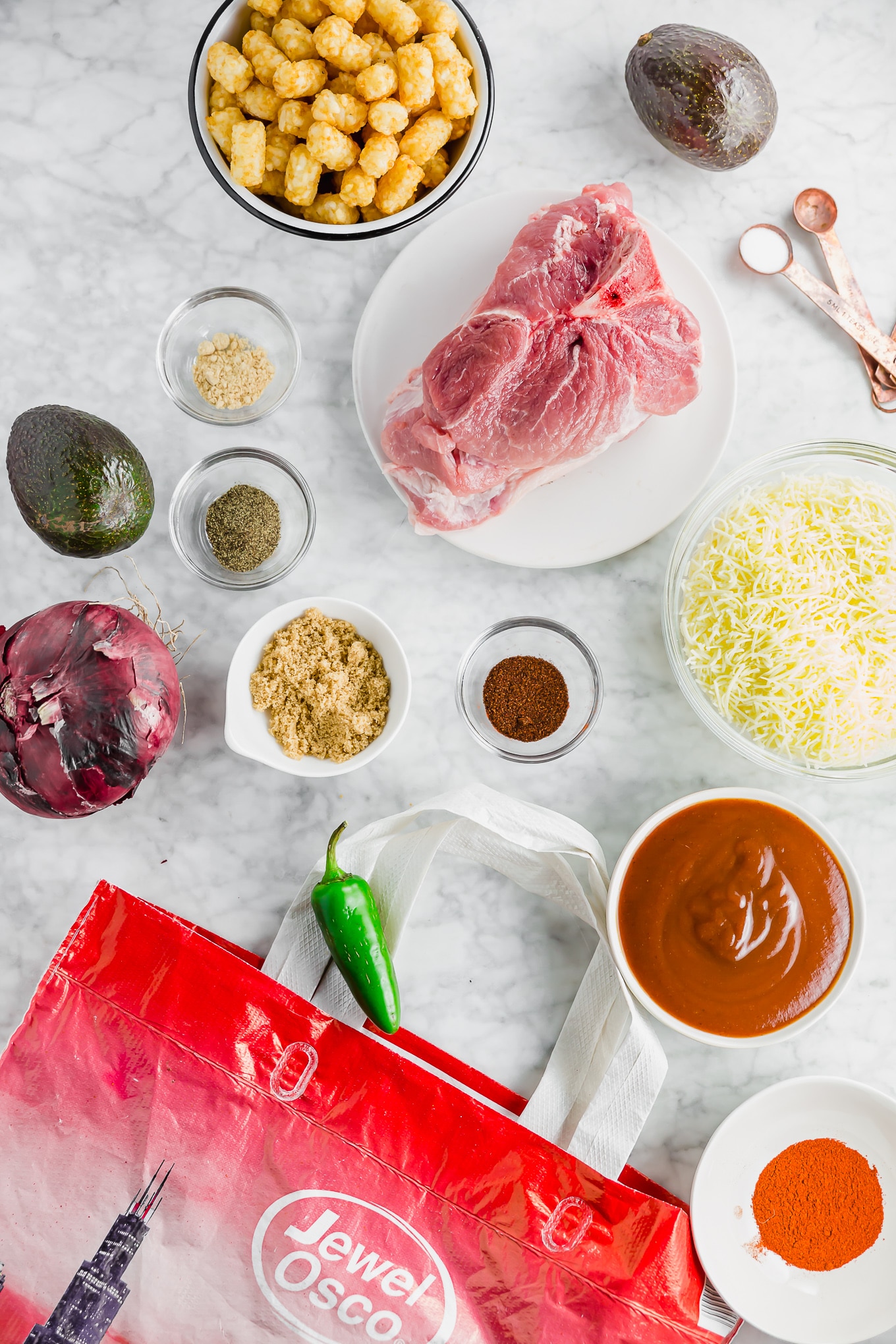 Which cut of pork is best for BBQ pulled pork?

You want to use a cut like pork shoulder for your BBQ pulled pork. I tend to use a boneless pork shoulder because it has a lot of connective tissue. So when it cooks low and slow (unless you’re using a pressure cooker like I am!), it creates a really tender meat that melts in your mouth!

You can easily find pork shoulder roast in the deli section at a Jewel-Osco near you. You may also see it called Boston butt or pork butt at the store.

You could also use a pork loin roast, which is a bit leaner than pork shoulder and not as fatty. You may need to decrease the cooking time slightly so that the roast does not dry out.

I do not advise using cuts like pork chops because they do not have a lot of connective tissue, so they cook too quickly and will not be pull-apart tender for BBQ pulled pork.

What temperature does pork need to be cooked to?

For flavorful, tender, and SAFE pork shoulder, cook the pork shoulder until it reaches an internal temperature of 195⁰F. It is best to use a meat thermometer to check the temperature.

Many people think that pork has to be cooked until the meat is white and the juices run clear. However, this isn’t true! The meat can be a light blush pink color. As long as your pork shoulder is cooked to an internal temperature of 195⁰F, it is safe to eat.

Shoulder cuts should be cooked to 195⁰F as the connective tissue needs to be rendered down. When cooking with loin roasts, chops, and tenderloin they should be cooked at 145⁰F for the best flavor and safest temperature.

The most delicious pork is not overcooked! 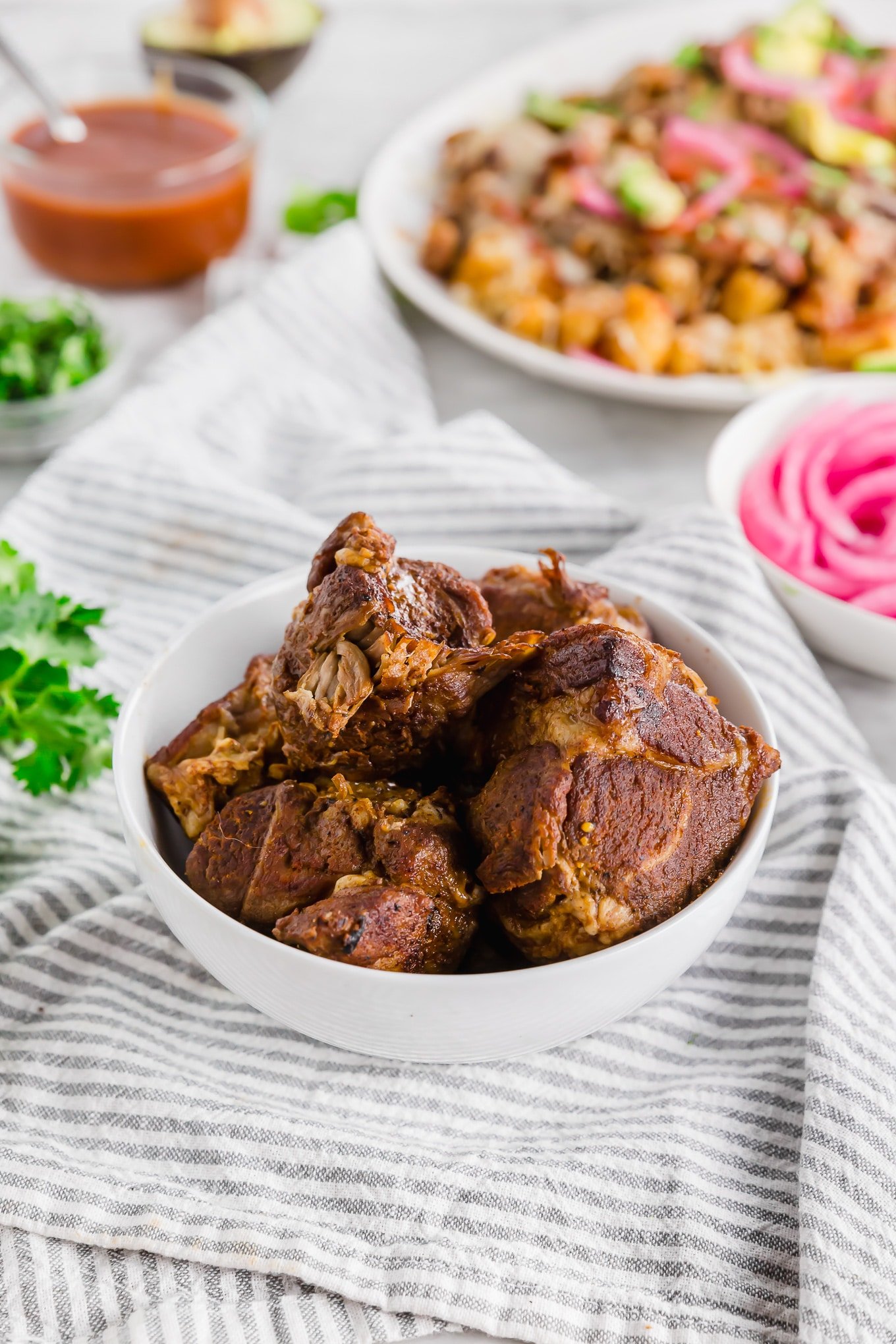 How to cook BBQ pulled pork in a pressure cooker

If you have a pressure cooker, it’s so simple to cook your pork roast for BBQ pulled pork! All you have to do is brown the pork on the sauté setting in your pressure cooker.

Then, you cover the pork with BBQ sauce, juice or water, and apple cider vinegar. Let the pressure cooker come to pressure and then cook for 45 minutes.

What results is the most tender, flavorful pulled pork you can imagine!

Can I cook my pulled pork in a slow cooker?

Yes! You can also cook your BBQ pulled pork in a slow cooker. I’ve done it many times!

Just brown the pork in a skillet on the stove instead of in the pressure cooker as written in the recipe. Then, proceed with the rest of the recipe but cook the pulled pork in the slow cooker on low for 6-8 hours. 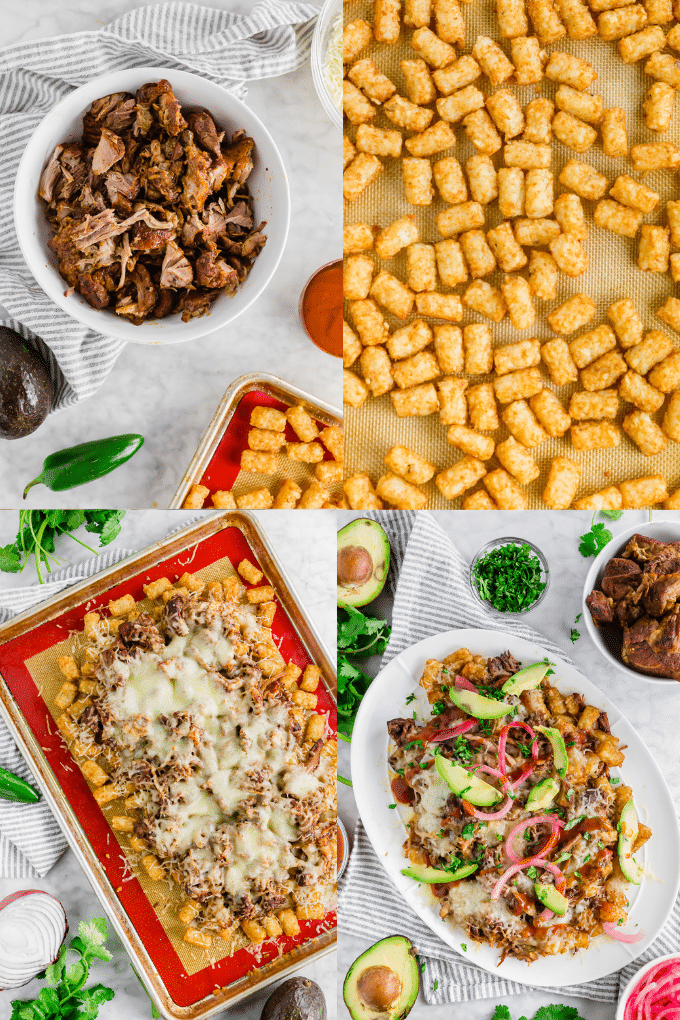 While these loaded tater tots do have a few steps, they are worth it!

First, you’ll have to cook your pulled pork in a pressure cooker or slow cooker. You can even do this a day or so ahead of time. In fact, leftover pulled pork is great for turning into loaded tater tots!

Then, you’ll cook the tater tots on a baking sheet in the oven until they’re nice and crispy. Top with the BBQ pulled pork and other toppings, and bake until the cheese is melted. Then, it’s snack time!

The sky is the limit when it comes to toppings for your BBQ Pulled Pork Totchos! In this recipe, I’ve used pickled onions, avocado, BBQ sauce, cilantro, and jalapeño for topping the tater tots. 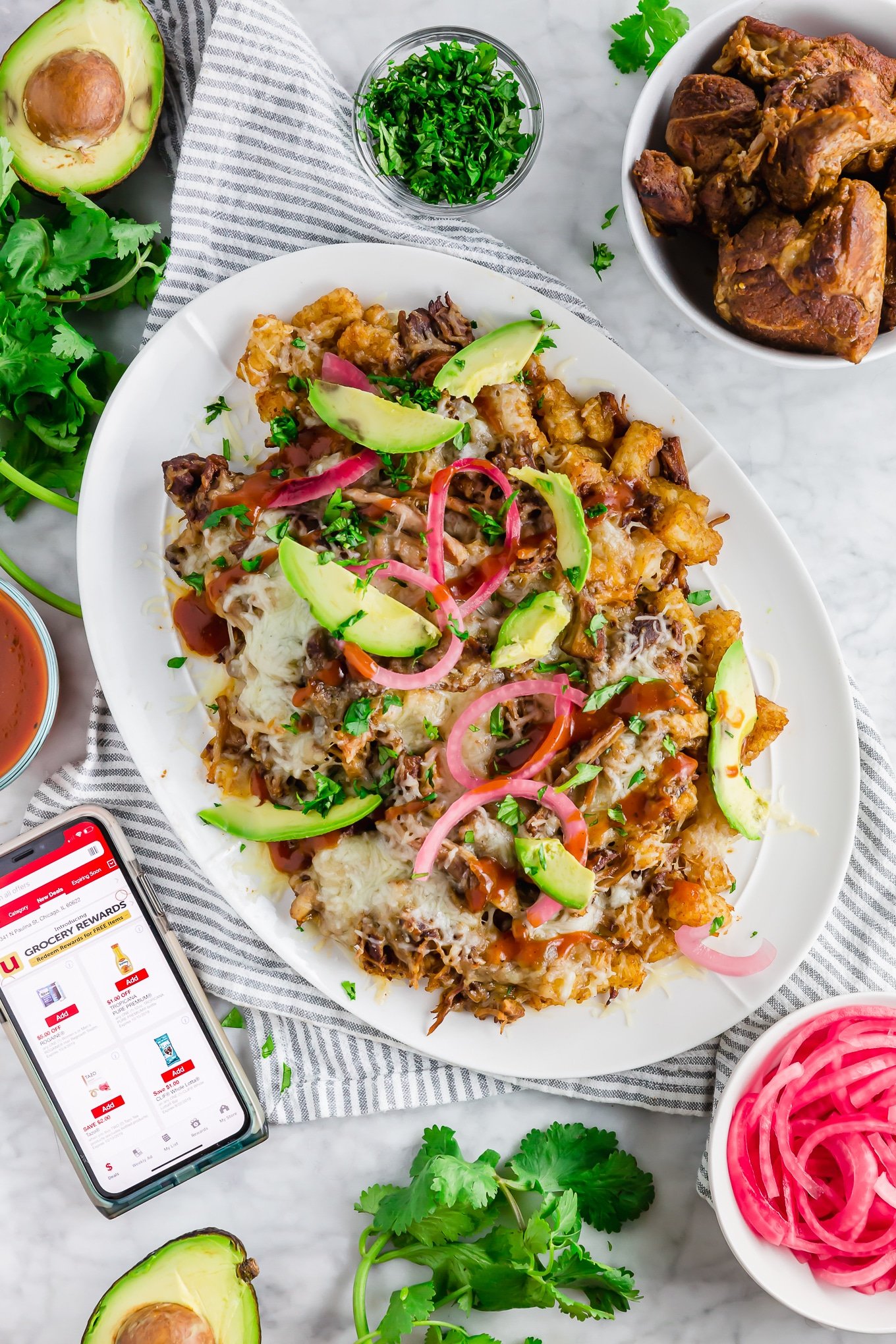 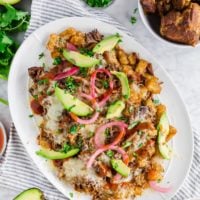 For the Loaded Tater Tots:

For the Loaded Tater Tots:

Head to your local Jewel-Osco to grab all of the ingredients for this yummy BBQ Pulled Pork Loaded Tater Tots recipe, and be sure to check out the Jewel-Osco mobile app for deals and coupons before heading to the store! 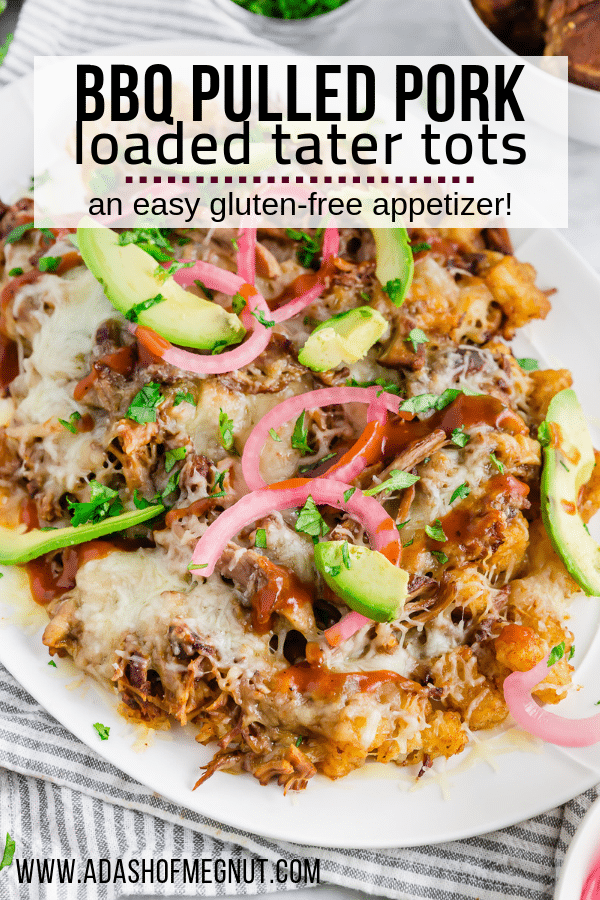