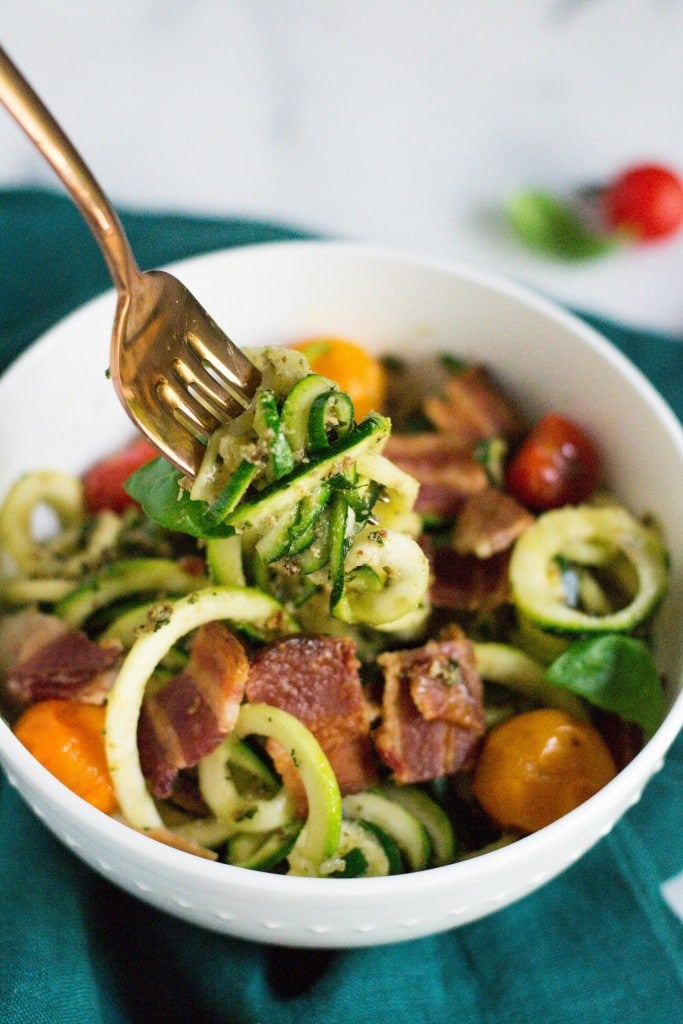 Alternative title options for this post include “Clean out your refrigerator Friday night dinner”, “Bacon makes everything better” and “I watched too many episodes of Chopped”.

Here’s the story. It was a Friday night and my boyfriend was heading over to his friend’s house and I was staying in for the night. I told him he could take my car and I’d be fine walking the 4 blocks (city blocks mind you) to Chipotle or finding something to eat at home.

Yeah, that walk to Chipotle wasn’t going to happen and there are honestly only a few places I can order food from that will deliver something gluten-free without me asking 100 questions to make sure said food is actually gluten-free.

After binge watching a few episodes of Chopped I convinced myself that if they can make a dessert out of squid, gummy bears and graham crackers or whatever it was they pulled out of their baskets, then I could make a dinner out of pantry staples and my garden.

It really wasn’t hard once I realized I had a whole ton of basil, lemon balm, fresh tomatoes, zucchini, and of course, bacon. Because my fridge wouldn’t be complete without some bacon. 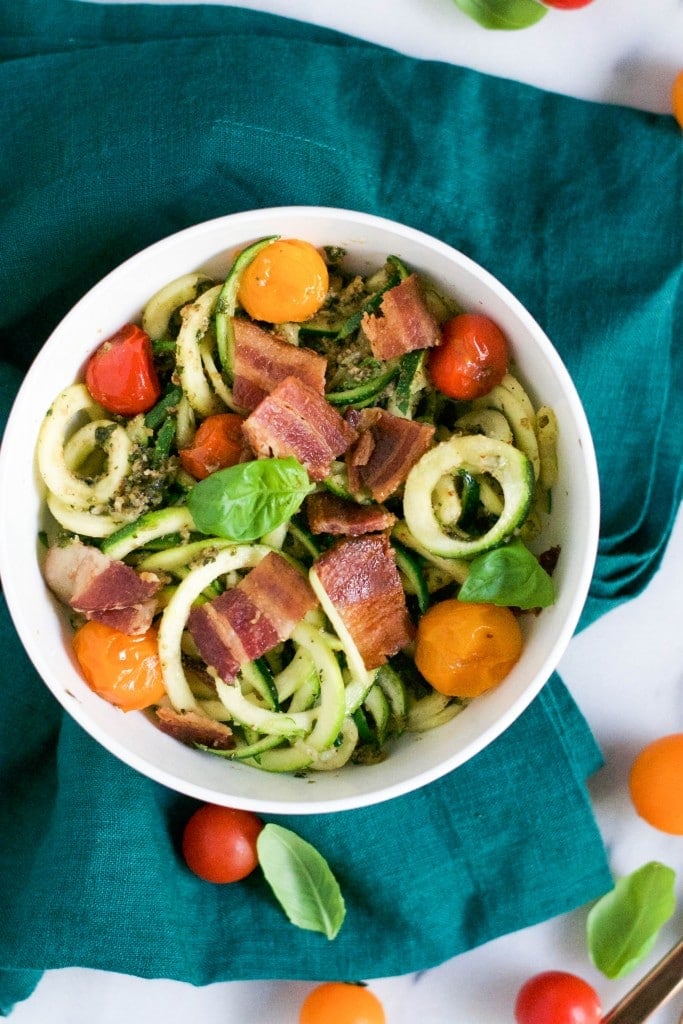 Bacon and zoodles to the rescue! I was expecting to just scrape by with some dinner but after one bite I realized I had created something pretty darn delicious.

A picture and a snap later and I had my boyfriend jealous of my meal for sure. Fast forward to a few hours later. Michael said he planned on grabbing some Subway for dinner and instead I get a call asking how long it would take me to whip up some of that bacon and pesto zoodle dinner for him.

Luckily, all I had to do was throw some more bacon into a pan and I was good to go! He declared that it was the best clearing out the fridge meal EVER. So while I may have gotten the easiest Chopped basket ever, I think even Alex Guarnaschelli would be impressed. Maybe (she is a tough judge after all).

**Note: This is the spiralizer that I use and I absolutely love it. You can find it on Amazon. This is an affiliate link and I may receive a small commission from any purchases you make through that link. There will be no additional cost to you. I only provide affiliate links for products that I use and love. Thanks for supporting A Dash of Megnut!**

To make this zoodle recipe even easier, you can learn how to cook your bacon in the oven! It’s easier and less mess than making it in a skillet. Especially if you want to make a big batch to save for various recipes throughout the week! 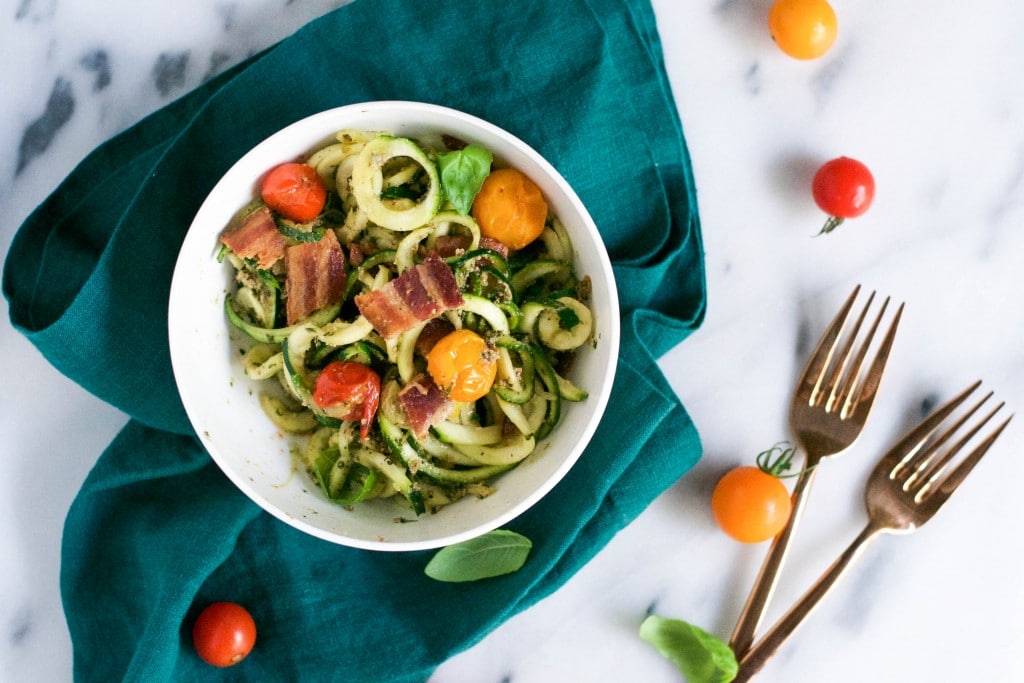 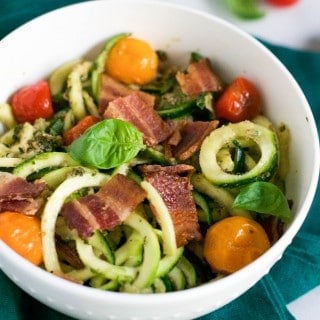 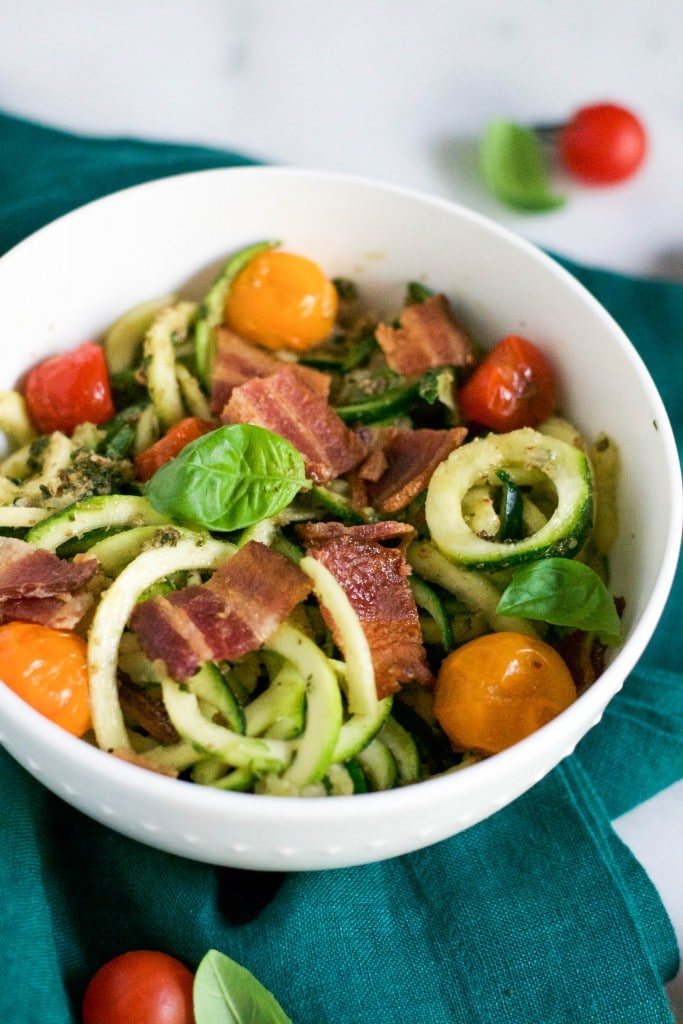