3.0K shares
Learn to make these gluten-free vegan raspberry rhubarb glazed donuts with this easy recipe. Donuts are on the table in under an hour, making them great for brunch entertaining! Gluten-free, dairy-free and vegan.
Jump to Recipe Print Recipe 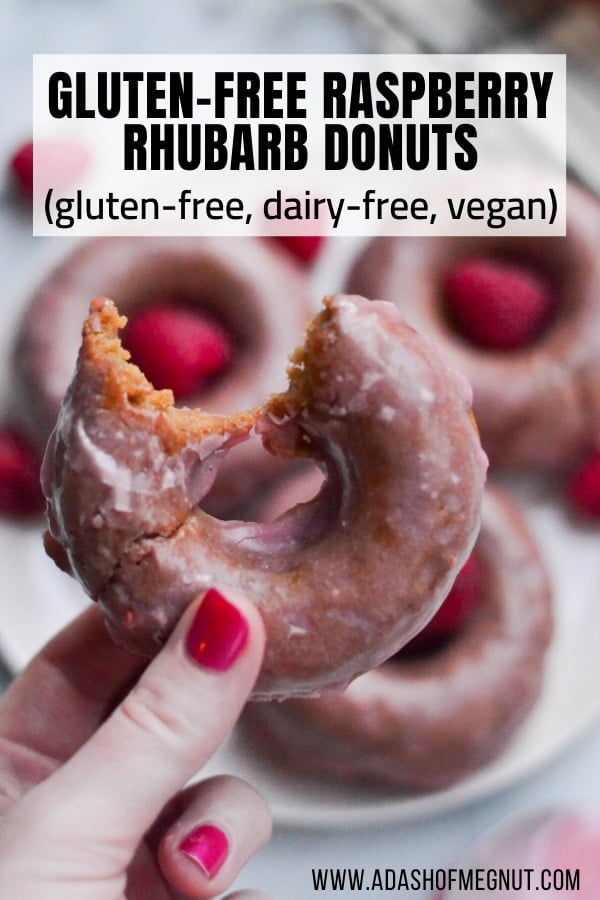 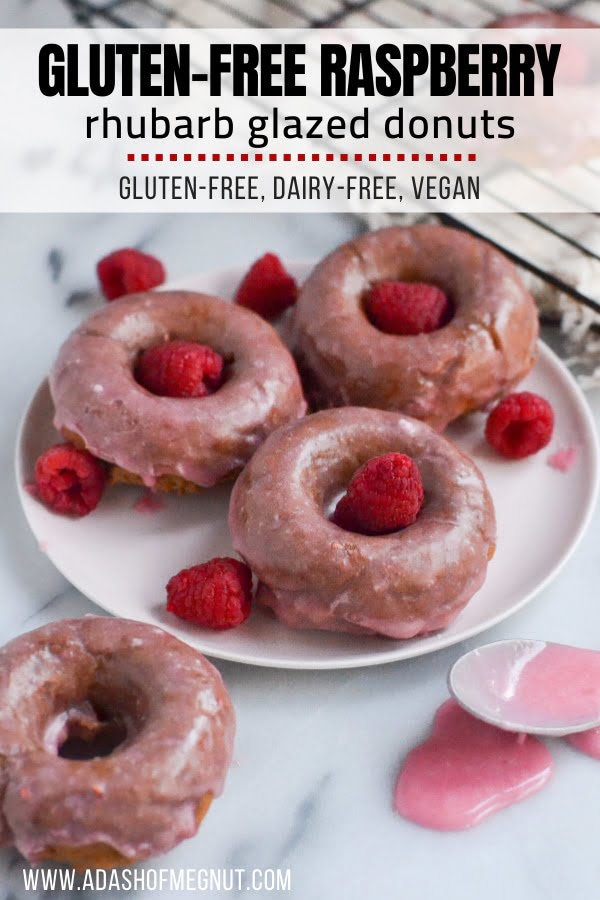 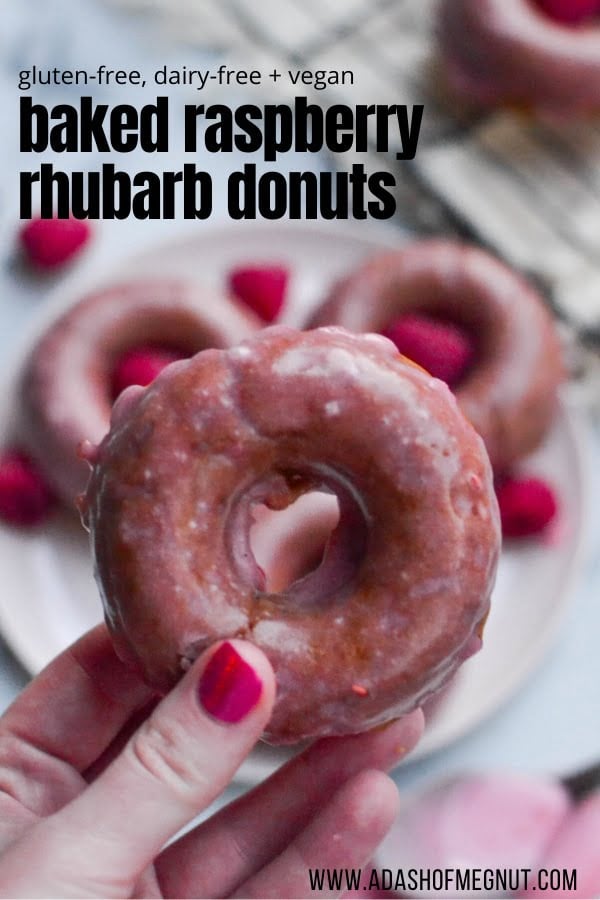 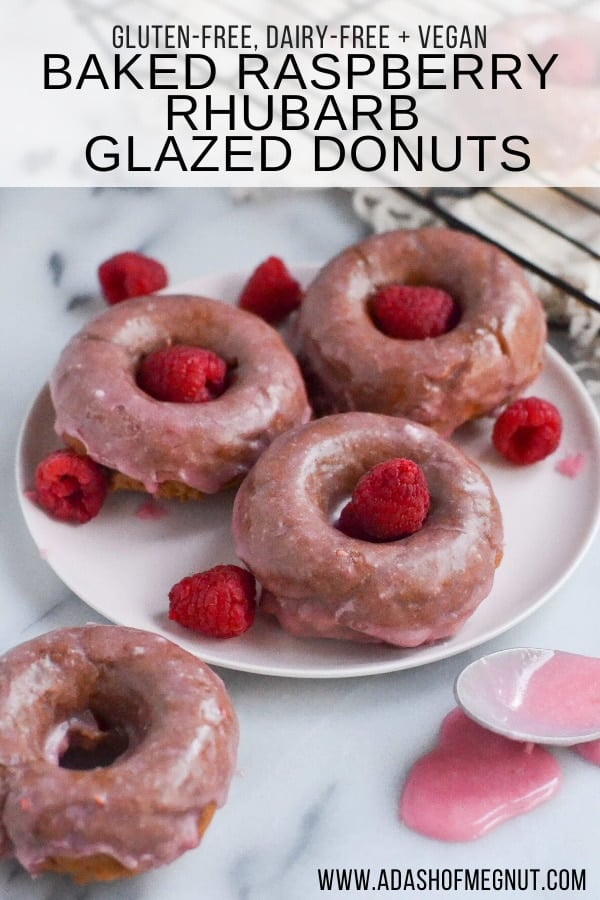 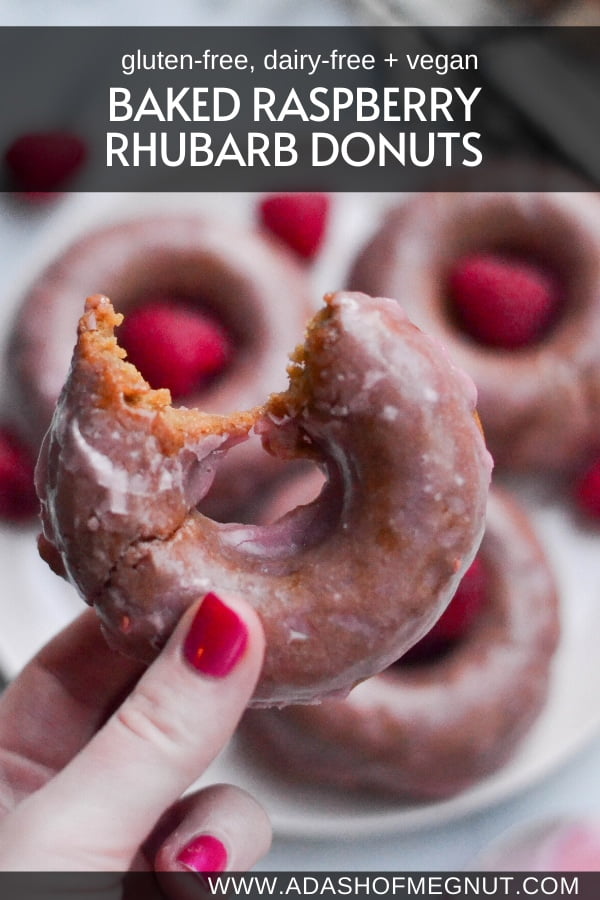 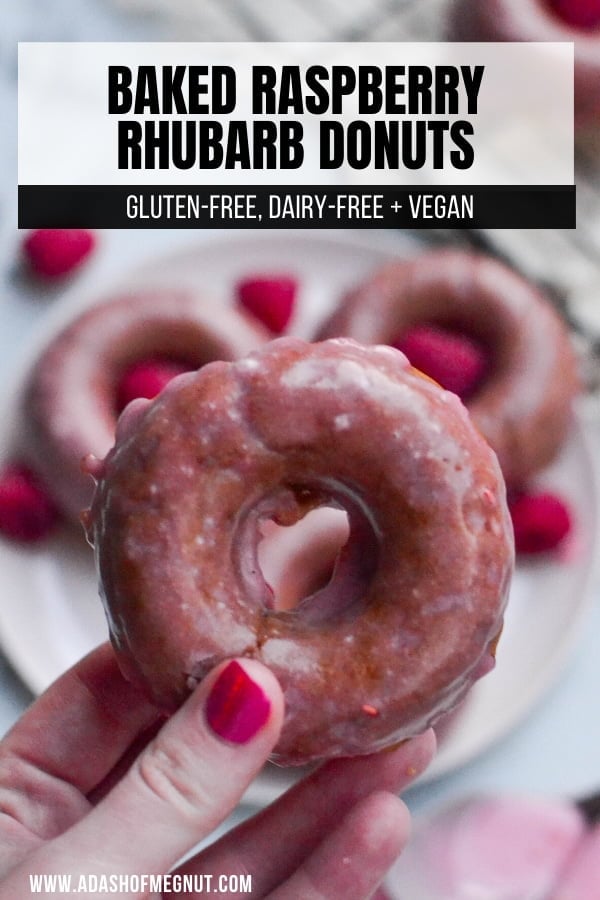 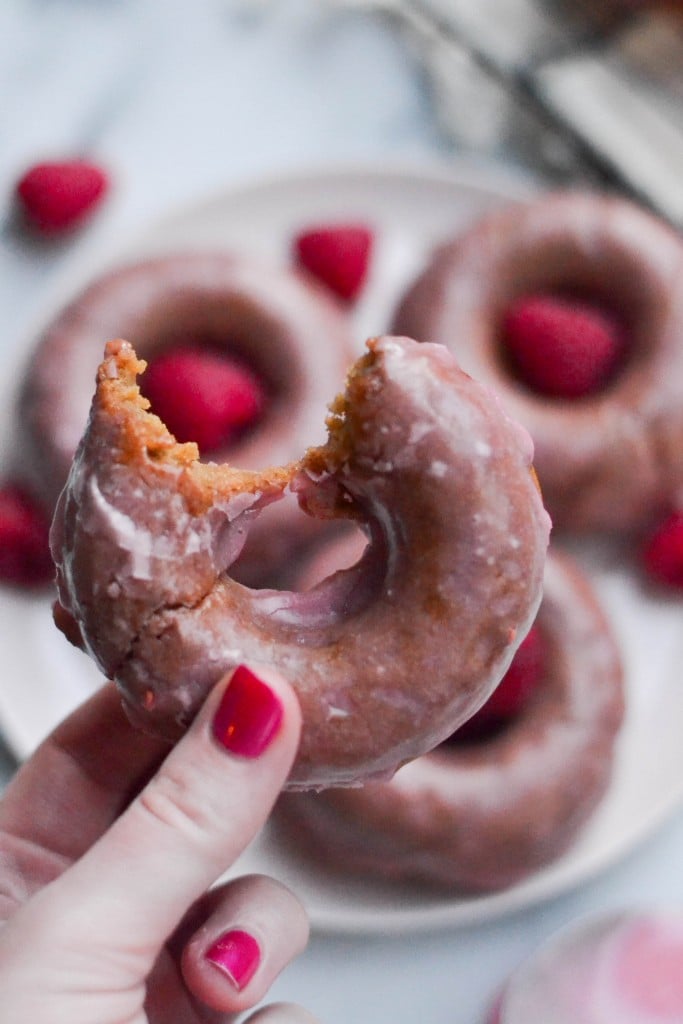 Today is all about the donuts. That’s right. It’s National Donut Day. As such an important national holiday to our culture, I figured I needed a donut. First off, do you know how hard it is to find a gluten-free vegan donut in Chicago? Apparently, very difficult. Every donut place under the sun has a gluten-free donut and also a vegan variety. But are they ever combined together? Nope.

This legit became a large research project this week involving many people (thanks for still talking to me after that) and emails to donut shops inquiring about their donut selection for this fine day. I told you it was serious stuff. To my delight, I did find two gluten-free bakeries that had vegan donuts in my research.
However, to my dismay, they are only open from the hours of 10-3 and 12-5, respectively. Doesn’t really help a girl out who works in the suburbs and can’t get back to the city before 6pm. So here’s what I learned in this journey. Either (a) Chicago needs more gluten-free vegan donut options that I can grab in the morning before work. OR (b) I’ll just have to keep making my own donuts.
Ding ding ding! We have a winner! Option B it is! (for now, at least) 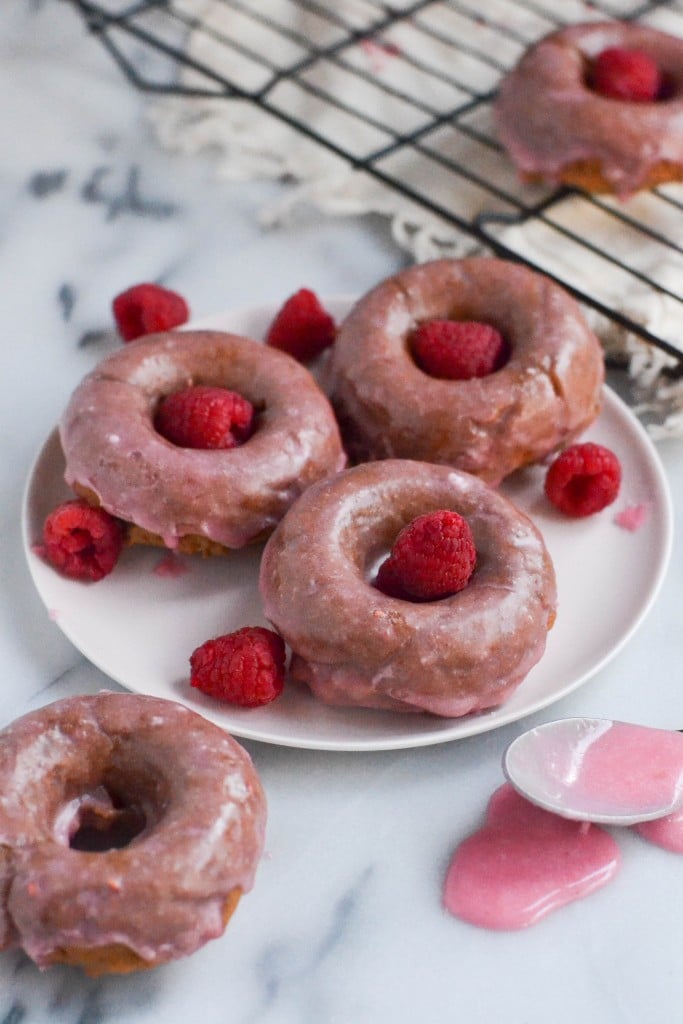 These gluten-free vegan raspberry rhubarb glazed donuts were definitely a hit in my house. And by my house, I mean my belly. I had originally planned on making lemon donuts but a trip to the store to buy lemons was needed and after a draining two hour commute home I just couldn’t get myself to do it.
Luckily, I had bought some gorgeous rhubarb from the farmer’s market the previous week and had frozen the extra for baking adventures like this one. Adding a little raspberry for color and flavor, alas the rhubarb raspberry glaze was born.
I tweaked my normal donut recipe to make it vanilla flavored and splurged a bit with using powdered sugar in the glaze. You know me, refined sugar usually isn’t my thing but I was just dying to have a normal donut glaze for once.
Also, if you are a true vegan, make sure your powdered sugar is vegan as well! I’m not vegan but just need my treats to be dairy-free and egg-free so I used normal powdered sugar.
These gluten-free vegan raspberry rhubarb glazed donuts are cakey yet pillowy, tangy yet sweet, and so so moist. That’s why it’s my favorite donut recipe!
If you’re not feeling the raspberry rhubarb glaze (though you should because it’s gorgeous and to die for) you can easily substitute any berries you have on hand and follow the recipe as is. Or you can use my refined sugar free chocolate frosting I used on these chocolate coconut donuts! All are great options! Now tell me, are you celebrating National Donut Day? 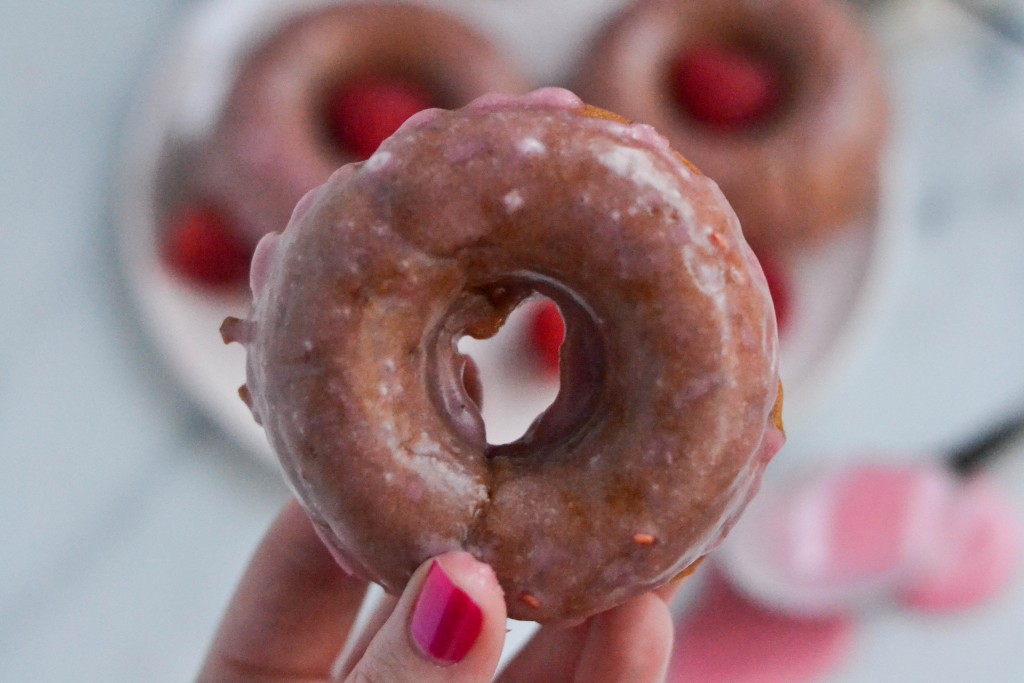 **This post contains affiliate links for products that I use and love. I may receive a small commission from any purchases you make through that link. There will be no additional cost to you. Thanks for supporting A Dash of Megnut!** 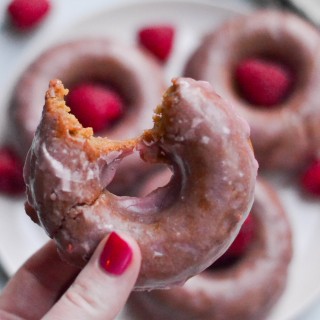 *Don't worry too much about the exactness of the rhubarb measurements - you'll be measuring out only 1/4 a cup and any kind of ratio of rhubarb and raspberry will be delicious so don't fret!